The walk along the Rev. Martin Luther King Jnr. Parkway was quite enjoyable, at first. Despite the traffic, the relative infrequency of pedestrians means it’s quite a wildlife habitat at the side of the road; a magpie-like bird (slight smaller) in a tree watching me cautiously as I walked by a few feet away. A small lizard on the pavement trying to look inconspicuous that scuttled off quickly when it realised how badly it was failing, and a huge beetle. The sidewalk was adequate, though on the west side it ended about 50 yards short of the end of the road, having done its intended purpose of serving a bus stop. The verge was well worn by, I suspect, fellow hotel guests heading for the Taproom.

The temperature was still well up in the 20s and the sun beating down, so I was glad both of the shade and the liquid intake when I reached my goal. The place was packed, but I managed to squeeze in at the bar. Before very long, I was engaged in conversation with my neighbours at the bar; Doug, a local firefighter who uses this place as his regular watering hole, and Craig, a travelling salesman flogging stone paving. An interesting conversation ensued about beer, work, baseball, the world in general – you know, the usual nonsense blokes talk about in bars!

The beer went down really well with the conversation:

I broke with one tradition by staying with another: The tradition that went was the last-night-of-the-holiday-steak — it looked just a little too pricey to consider here, so the one I stuck with was the same as all week long; the burger!

The walk back took me through Barnes & Noble in its last hour of opening; though it was still fairly busy with students cramming for exams occupying most available seats! My only purchase was this week’s Entertainment Weekly. Back to the hotel and the young lady on reception who checked me in welcomed me back and asked about my night. I’d already mentioned my plans to walk to Sierra Nevada and she seemed genuinely thrilled that I’d had a good night. No-one I’ve spoken to can quite beleive that someone from England has heard of Chico and/or Sierra Nevada beer! 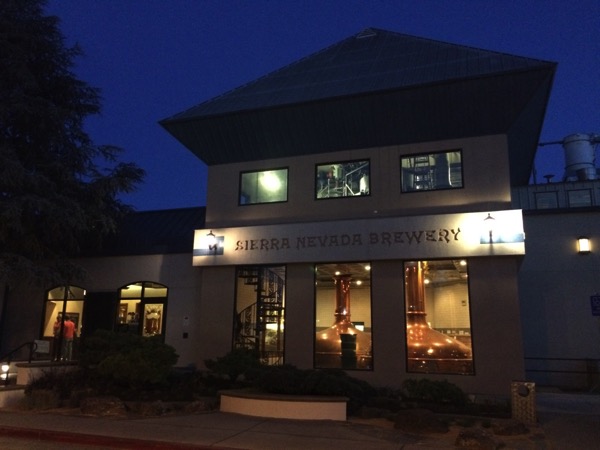 Although I was nodding as soon as I got into the room, I set an alarm for 23:35 as I wanted to see some of the penultimate edition of The Late Show with David Letterman. Bill Murray was the guest and I have to say that despite the obvious familiarity between the two men, I thought Murray’s memorable appearance on the Graham Norton show was much funnier. With due respect to the legend that is Letterman, he is ready to retire.

Online check-in is done. I’m in Seat 16A and looks like I was one of the last to check in as there was limited availability for change on the seat map. The gate closes at 20:55 for a 21:25 flight. I’ve done a quick mental double-check to ensure that there are no time zone issues! I aim to have the car back by 18:00 to be at the International Terminal for 18:30… Hopefully the bag drop will be open by then and I can get into the lounge.

It is a little after 07:00 as I type this (but now nearer 08:30 as I tweak it and post it), though I’m not showered or packed. Either way I should be on the road about 08:00. What to do in between…. No matter what, it looks like Sacremento figures in there somehow. The California State Railway Museum has been recommended to me and is 88 miles (hour & a half) away and opens at 10:00. Factoring in some breakfast somewhere, that looks good.

It’s all looking like a plan. I’m just waiting for a camera battery to charge which I forgot to do last night and I’m on the road…