It’s good to be back in Boston. Maybe it’s the familiarity, maybe it’s being so much closer to home, but for whatever reason, I felt much more relaxed today once I got to Boston. Or maybe it’s being in a really good hotel room with a belting view of the cityscape and baseball on the tv? 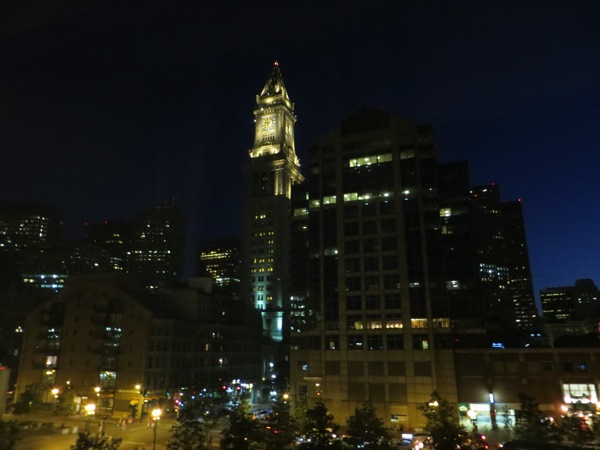 Or maybe it’s having enjoyed some of the best beers the Cambridge Brewing Company have to offer. You decide….

In some respects, last night was the quietest night in a hotel room for some time. The rooms either side were evidently occupied, but in neither case by a screaming baby, an elephant or anything other than a normal and considerate traveller. Further afield, however, the peace was regularly shattered by an assortment of police sirens, fireworks (it is the day after Independence Day), squealing tyres/revving engines, and assorted urban cacophony. In short, the Charlotte Airport ABVI isn’t a bad motel, it’s just located in a really [insert your own negative adjective here] area.

For saying all that, come 07:30, a new day began, everything was in one piece and it was business as usual across the road at the garage when I went over there to fill the car. I drove the couple of miles to the National rental return – end mileage for this part of the trip being 873. Straight on to the shuttle and I was at the US Airways check in by 08:30.

First (and only) setback of the day; my new big bag (the old one being consigned to the trash at the hotel – shame it didn’t make it around the world) weighed in at 62.5lbs, which didn’t escape the notice of the agent as I was only allowed 50lb. I was given the option of paying $95 for the overweight bag, but opted for Plan B which involved checking what was going to be my carry-on, using my computer rucksack in that capacity instead. A bit of shuffling around of contents and the payment of another $35, and I checked a 48lb and a 24lb bag.

I then joined what was, initially at least, a huge queue for security screening. A bit of ‘queue management’ by the TSA staff resulted in many folk being diverted to other check points, while I stuck with the ‘B’ line I was in, not least as I was in no rush whereas many others evidently were. In the end, it was around 20 minutes before I got airside, which I thought was fairly average.

First job was coffee and a muffin. I had 90 minutes to pass before boarding, though with lots of people-watching to do, along with free WiFi, it passed remarkably quickly. The aircraft was an Airbus A321 and when boarding rolled around, I was in 31F – right hand side window about five rows from the back. We were wheels up at 11:30 for an announced 1hr 46 min flight. For the most part, the route took us up the eastern seaboard, hitting the coast around Norfolk, VA and over Atlantic City. As we were just inland, we were directly over Philly, DC, and New York, so I couldn’t see them. The next feature I could pick out, 33,000′ below, was Long island as we banked right a bit over Connecticut and along the Rhode Island coast. With Cape Cod in the distance we banked left again and began the decent into Logan.

We landed at 13:11, so a little before the predicted time. It made a pleasant change to arrive at Logan and not have to queue forever in immigration. There was a brief delay while bags appeared, but indeed they duly did and I wheeled my new four wheel drive beast out to the shuttle bus to the Blue Line station. Once there, as trains outbound from the Airport were substituted with buses, it was somewhat chaotic (though as I was ‘inbound’ not a direct inconvenience). I decided the most cost effective ticket option for me was to get a seven day $18 ‘T’ ticket, as they no longer do a three day version, while a one day ticket is $11.

Before very long at all, I was back out at street level at Aquarium Station, wheeling across the road to the Marriott. By Heck it was hot. I later saw a thermometer which said 93 degrees – and I had no reason to disbelieve it. The city is also incredibly busy, mostly with tourists, given that it’s a weekend.

Unfortunately, when I tried to check in, a very friendly and empathetic receptionist said there wasn’t any king size rooms ready yet, so I checked my bags and went out for a wander in the interim. I retraced old steps through Quincy Market and up to the Downtown Crossing area. This is unrecognisable from previous visits as the former Filene’s department store is in the process of being demolished.  Barnes and Noble is empty and the former Borders bookstore is now a Walgreens pharmacy. 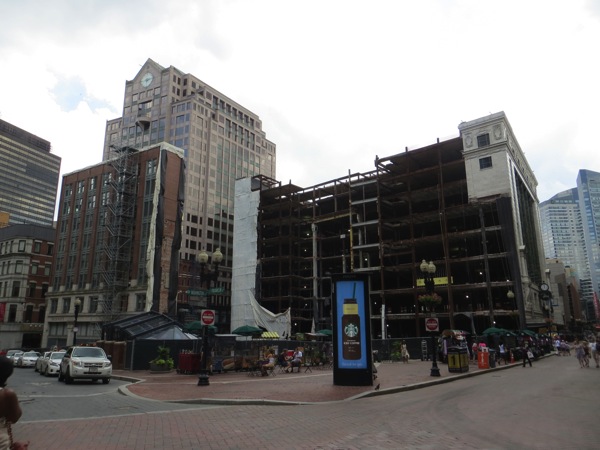 Back round via Government Center to Quincy Market where – by now 15:00 – it was time for lunch. I had a variation on the local delicacy – not caring for clam chowder – chicken soup in a bread bowl. A great idea, but ultimately wholly impractical! Very enjoyable, apart from getting chicken stock all down me!

It was while I was eating this that the news broke about the SFO air crash. As I followed details of this on Twitter (and later, on CNN, enduring the same clueless waffling talking head news readers we have in the UK – “the details are still very sketchy”, intoned the voice-over with aerial footage of the stricken aircraft just off the runway, “but we don’t believe that any buildings, structures or vehicles are involved”. Ya don’t say?)

I decided I  was too hot & sweaty and in need of a change of clothes (not just because of the chicken soup stain!) to wait any longer, so made my way back to the Marriott. Apparently the room on the fourth floor they’d earmarked for me still wasn’t ready, so they put me in one on the third floor with a city view instead of a harbour view. Truth be told, I think I’d prefer that.

Once showered and changed, I hit the streets once more, walking back up to Government Center to catch a Green Line ‘T’ to Lechmere. Oh, the Green Line; truly an icon of Boston, not least because of the unique aroma underground.

At Lechmere, I wandered the shops – oh, blissful air conditioning – and took a few photos. The obligatory check-in at the Apple Store, of course. Then I walked the several blocks to Kendal Square, Cambridge to get the Red Line out to Harvard Yard. Again, this was more reacquainting myself with old haunts than discovering anywhere new. Similarly, it was both very hot and busy in Cambridge too.

Back to Kendal Square on the Red Line and my target for the evening; the Cambridge Brewing Company. Beers; Collier Stout 4.0%, Charles River Porter (house beer) 6.0%, Tell Tale Pale Ale (house beer) 5.8%, and an another Collier Stout. Food; Burger – of course. The Collier Stout is definitely worthy of remark: It has been brewed in honour of Officer Sean Collier, the MIT Police Officer murdered during the Boston Bombing manhunt, and whose photograph is proudly displayed behind the bar.. The choice of ‘stout’ as the beer style being a reference to the strength and resilience of law enforcement – and the Boston Strong theme. Profits from this beer go to the Jimmy Fund, a Boston charity that Sean Collier was a keen supporter of.

Back via the Red Line and a walk through the dusk streets from Park Street. The city was still humming with tourist life and it was still very warm. I called in at a convenience store for room supplies. No beer though as it’s a Massachusetts quirk that only dedicated liquor stores can sell alcohol – which can be a pain at times. Interestingly, I was panhandled again as I went in. My response was exactly the same as last night – eye contact, a shake of the head, and a brief, “Naw”. The response this time was, I think, typically Boston – “OK, thank you. You have a nice night” – as if to say, well, I was only trying, no problem, let’s both move on. Not at all threatening or persistent. And the thing is; this guy has a LOT more competition here than the two guys from last night who had a captive market on the busy garage forecourt.

Back in the room. Leisurely Sunday tomorrow.