I’ve climbed volcanoes, crossed mountain ranges, deserts and salt flats, I’ve covered 491 miles — and that doesn’t even begin to scratch the surface of the day. 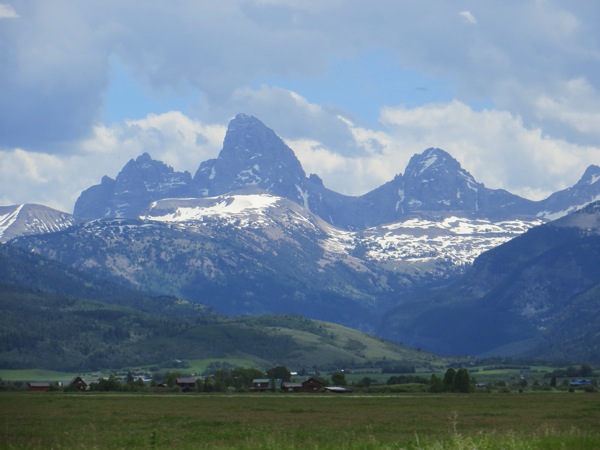 By the way, I updated yesterday’s entry with the second half of the day. If you subscribe to this blog, you may not have seen the full version. Just FYI.

Now let me try and expand on today’s adventures…

As planned, I got an early start, grabbing a quick breakfast from the Shillo Inn before getting on the road for 06:40. Heading north, after following a house for several miles (a pre-fab on two multi-axle artics — though they were making a the 65mph speed limit, so it wasn’t a problem), I was puling into the Craters of the Moon National Park, a couple of hours later. This is an environment I have never experienced before — a lava field and series of volcanic cones. Within the park, for a mere $8 entry fee, there’s a scenic drive. I didn’t do it entirely the American way, I actually got out the car and climbed to the top of the Inferno Cone — even though it nearly killed me. The panoramic view was (at the risk of over-using this word) spectacular, if a bit windy. 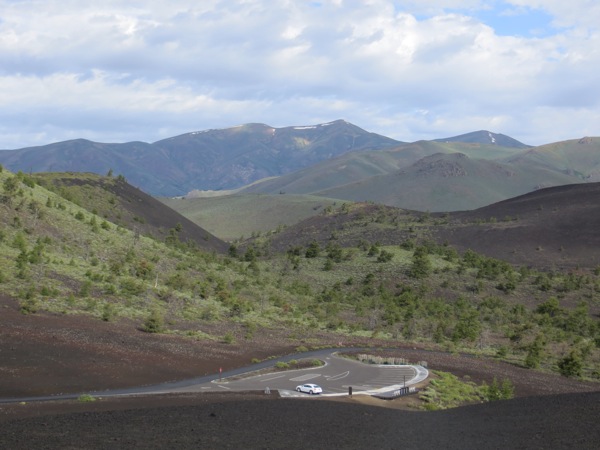 Back on the road, with the first of a few spots of rain – it never amounted to anything more all day. I got my first distant view of the Grand Teton mountains, over 100 miles away, and I’d be getting a lot closer before the day was even half done.

The town of Arco has weird cliff faces overlooking the main street which are covered in large numbers, visible from a considerable distance off. However, the town provided coffee from a gas station for the princely sum of $1.

Carrying on eastwards, through such places as Howe and Mud City. This part of the world is a mix of high rocky outcrops and rich arable land. Truck after truck (some with three articulated trailers, which makes for a really Big Rig) were coming the other way laden which hay bales. A pair of crop dusting aircraft were hard at work some distance away on each side of the road. Very productive and fertile land, obviously.

Crossing I15, which runs between Butte and Idaho Falls, I continued east. I stopped to take in the scenic view at Menan Buttes, shortly having entered Madison County (isn’t that a movie?) before reaching the town of Rexburg, my second waypoint of the day. I spent a bit of time enjoying the bright sun here and took lunch in the form of a good old roast beef combo from Arby’s. Another FaceTime with Kay rounded off my enjoyable stop in the town.

Back on the move, leaving the Rexberg area via the delightfully named Sugar City, the Great Tetons were getting ever closer and the countryside was getting a bit more up and down. The road was certainly busier east of Rexburg, I’d no longer got it to myself, which was a bit of a blow. 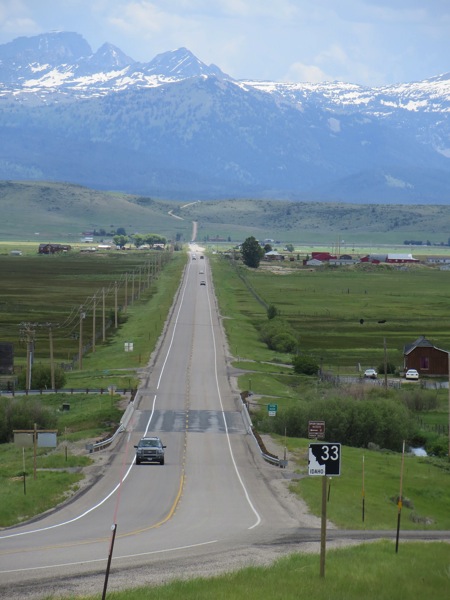 Once through the towns of Tetonia and Driggs, the climb into the mountains began in earnest. Before long, the Wyoming state line hove into view, so quickly I nearly missed it. From there, it got a whole lot steeper and the car, whilst maybe not struggling, was certainly working hard. Of course a big pick-up left me standing! At the top, another — spectacular — view over Jackson opened up and I pulled over to the large lay-by to take it in. It was, of course, still a lovely warm sunny day, so all the warnings of avalanches, snow slides and the need for snow chains seemed a little out of place.

Down the other side, being overtaken by a Wyoming State Trooper in a hurry, who I saw a few moments later having pulled over a ropey looking Ford. Into Jackson there was extensive roadworks on the outskirts causing congestion. Having got past that, I then hit the pedestrian congestion and general chaos of Jackson itself. It reminded me of Bakewell on August Bank Holiday Monday. I was pretty sure I wasn’t going to be stopping here. Once I eventually found a place to pull over, it was simply to check the map to find a way out.

The mileage for the day was already 281. When I set out this morning, it was with the ideal aim of getting to Riverton, east of the mountains. It would be another 163 miles, and a route taking me up and over another mountain pass. When I get there, I would still be a ways north. The alternative was to head south, with Rock Springs the nominal destination. Bizarrely, this decision was made in the knowledge it was even further, aggravated by picking a back-road route. Still, that’s what I decided to do.

I set off from busy Jackson, onto busy Rt 189. When I split off to the left (at a ‘rotary’, still something of a novelty in these parts), the traffic thinned out. Most were headed downhill along the Snake River toward Salt Lake. I climbed up along the Hoback River valley.  And y’know what, more spectacular scenery… 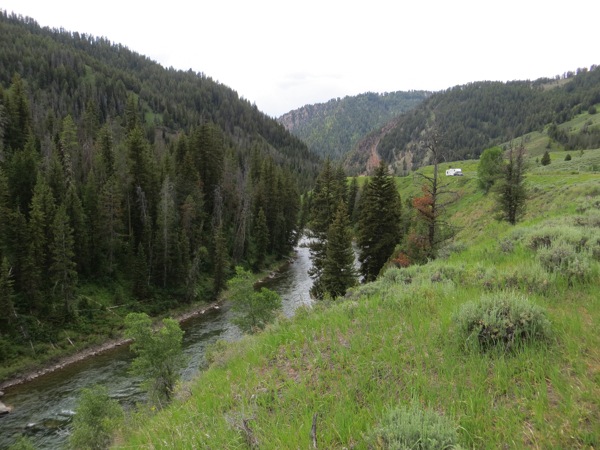 After a while, the ground levelled out and before long I was in a huge canyon, with weathered, colourful rock formations either side. A smaller version of the Grand Canyon is best I can describe it as.

I stopped for some much needed coffee at a garage at Big Pinney, a major quarrying area by the look of it. Then, just like that, water appeared and all of a sudden, what was already, er, ‘spectacular’, got topped. The Fontenelle Reservoir…

I still had an hour or so driving, and the tank was heading below a quarter. I’d been deliberately economical with my driving, doing without a/c when I could. As the temperature only topped 80 for a bit in the afternoon, that was bearable. I also used the cruise control to keep me on the 65mph limit, which I have to say makes the driving much more relaxing. The route I’d picked took me to the town of Green River, eleven miles west of the planned Rock Springs, so as I approached, I decided to see if I could find anywhere there. The last few miles of my route into town paralleled I80 and I could see hoardings on there advertising the usual suspects at exit 89. When I got to Green River, I must have taken a wrong turn, as all I found was a museum, a huge Union Pacific rail depot and a few garages. Only a couple of ‘flea pit’ motels.

I decided to use the last of my petrol to carry on to Rock Springs. (I keep wanting to type Radiator Springs – the likeness is uncanny, down to the wonderful rock formations and the small town bypassed by the interstate….).  Approaching Rock Springs, more large adverts confirmed I’d have a good choice. My first call, when I found it, was Motel6 but all they had was smoking rooms, so I passed. I tried my new found liking for America’s Best Value Inn and Suites, and they came up trumps.

As I said, I’ve driven 491 miles over 11½ hours, though I’m actually only 277 miles from where I started as the crow flies. A hell of a day’s drive, by any standard though.

I’ve spent the evening, before typing this, working the internet and fleshing out the last week of the trip. The remaining time looks like this….

I think I’ll sleep well tonight. Watched the much-hyped premiere of Stephen King’s new tv series, Under the Dome. It runs for 12 weeks, so I guess now I’ll have to look out for it.

It’s Sunday lunchtime, and I am sitting outside Starbucks at 17th & State in Boise. A pleasant little neighbourhood, with leafy suburban houses on one side, and a small plaza, of which SBs is part, on the other. I’d told Siri to find me a Starbucks in Downtown Boise, and this is where he brought me. (“He”, because I’m still using the British English version – which makes pronunciation of some of the directions comical – for example “us one hundred and one” instead of “U. S. One oh One”). By-the-by.

The ride down Idaho Rt 55 was another spectacular drive…

A few lines about the day so far…

END_OF_DOCUMENT_TOKEN_TO_BE_REPLACED

Wow, oh Wow! I have seen so many sights today, words cannot begin to describe the highlights. I’m in McCall, Idaho, and had been here a couple of hours before I realised I’d lost an hour crossing into Idaho and Mountain Time. Oh well. A really picturesque town and a wonderful place to spend the night.

Before I get here, however, there’ s a day’s travelling to summarise for you….

END_OF_DOCUMENT_TOKEN_TO_BE_REPLACED

Hermiston, Oregon serves as my second overnight stop on the road trip. This is about 230 miles as the crow-flies from the Pacific and around 280 miles via the route I took. I got here about four-ish and am spending the late afternoon & early evening exploring the town. This message comes to you courtesy of the town’s rather fine Starbucks.

More about the journey…

END_OF_DOCUMENT_TOKEN_TO_BE_REPLACED

I’m typing this watching the sun go down over the Pacific. That in itself is a sentence which makes me really happy to be able to type. I’m back on the road, currently at the aptly named Oceanside, Oregon. While I wait for the last few rays, in the hope they will be truly spectacular, I thought I’d make a start on the Blog before I return to my base for the night in Tillamook. Got to be better typing here than in a motel room?

There’s a bit of catching up to do before the story gets here, however…